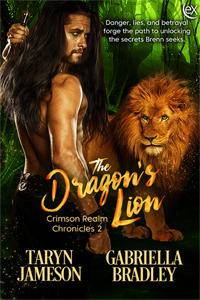 Danger, lies, and betrayal forge the path to unlocking the secrets Brenn seeks.

The rescue of Brenn’s pride sets off an angry tirade from Cewrick that results in curses that almost cripple the Crimson Realm and all of Ierilia.

With the help of Ciara, Brenn leads his crew through the bowels of the planet and the forbidden forest to unlock the secret of defeating Cewrick. But will his defeat end the reign of terror on their world?

The king quickly stepped toward Brenn and hugged him. “It is good to see you, my friend. The rescue went well.”

“Yes, but now we face Cewrick’s wrath, as you have witnessed,” Brenn answered, disengaging from the hug.

Biryn filled three goblets with wine. “Aldis should be here any moment,” he told Brenn.

He’d no sooner spoken, and the admiral arrived. “Aldis, congratulations on a successful mission,” the king exclaimed, holding out a goblet.

“The praise goes to Brenn and his men. He told me to stay with the ship,” the admiral grumbled.

“And for good reason, I presume?” The king looked at Brenn.

“The admiral is not used to ground missions or combat. I did not want to risk his life,” Brenn told Biryn.

“Good decision. But now we face the wrath of the sorcerer. Cewrick has unleashed his minions upon us. Aldis, why didn’t you annihilate the swarm of black dragons and urcals?”

“Brenn told me that many of the black dragons were once jewel dragons or humans. When the curse is lifted, they will return to their former state. Since the urcals and dragons flew as a flock, I could not attack,” Aldis explained.

“I would not see the jewel dragons harmed or any humans. I abide by the decision, but many of Ierilia’s people were abducted before the warning transmission went out. What do you suggest we do in case of another attack?” the king asked.

“Cewrick’s attacks can come in many forms. He has spies among us. He could use his magick and create other spells, or he could use his black dragons and urcals to attack again,” Brenn said.

“What about your jewel dragon? Can she not help?” the king wondered.

“No, not against a swarm of them. She is but one and feeling helpless right now. It took a lot of her energy to fight the black wind funnels. She could not undo the stone curse. Her magick cannot come into full force until Cewrick is slain. And there is only one that can help us annihilate him,” Brenn said.

“Cewrick has a son? That is news to me,” Biryn said.