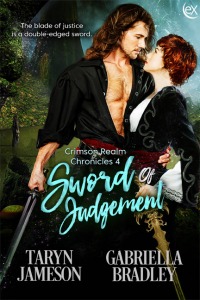 The blade of justice is a double-edged sword.

Betrayed by several members of her crew, Erica now finds herself in a race to beat the clock. A rare poison injected into the king’s blood from the blade of her sword, threatens his life.

Erica joins her lifemate, Laro, and the rest of the team, on a mission rife with danger to search for the antidote to save the king. With an angry god bent on destroying the royal line by any means possible, the team doesn’t know who to trust or what Zohmes will do next.

Can Erica find a way to prove the innocence of her crewmembers before the blade of judgement falls?

Erica handed the king the datapad. “A shaft of lightning struck me from a clear sky and etched it onto my back, Your Majesty.”

Biryn scrutinized the map closely. “Erica, may I see your back? We can go to the privacy of my bedroom.”

Erica suppressed a giggle. How often in life did a king request to see one’s back in the privacy of his bedroom? “Everyone here has ogled my back, Your Majesty,” she said as she pulled up the tunic and stood before him.

“I am sorry our gods subjected you to this, Erica. Did it hurt badly?”

“No, Your Majesty. I was spooked and was flung to the ground, but all I felt was a little bit of stinging on my skin, like a sunburn.”

“Ciara, can I speak to you in private?” the king said.

The king walked to his bedroom, followed by Ciara. The door closed behind them. Suddenly, all startled as the king’s loud voice sounded through the closed door.

“Who are you, wench? Go back to Yanata from where you came! Do you hear me? What are those creatures doing in my room? Get away from me!”

The door opened, and the king ran out, a wild expression on his face. He looked at them all without recognition. Cylena reached out and touched the king’s arm. Suddenly, he became completely lucid again.

Ciara walked to Cylena. “My dear, it seems the king is only lucid when you are close and touching him. I now understand the goddess Rania wanting you in his presence. For some unknown reason, you radiate a power that will keep him calm. Stay near him at all times, please? Icaras will stay with you if it is too much for you.”

“I sense my powers increasing. I feel you are needed to find the antidote for the poison, Icaras. I will stay with the king. You need not trouble your mind with worry about me.”

“We need to wait until we get the test results,” Erica said.

She’d barely finished speaking when Catrice, followed by Jason, entered into the king’s quarters. Catrice bowed before the king. “Your Majesty.”

“You are Catrice. I remember you,” Biryn said.

“Yes, Your Majesty. We have isolated the poison in your system.”

“After comparing it with the poisons in your database, it’s a poison called veervaraine. The toxin will cause confusion and delirium, eventually leading to total madness.”

“Your Majesty. If I may interrupt. I did some research on the veervaraine toxin,” Jason said as he set his datapad in front of the king.

Erica could see the datapad from where she stood. It showed a picture of a giant mushroom on the screen. There were many mushrooms on Earth that were poisonous. There were even farmers that had become ill from breathing in spores from edible mushrooms.