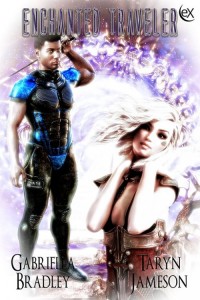 A wish upon a star, conjures up much more than Nailah bargains for…

Nailah Guevera, an enchantress and agent for the Galactic Bureau of Investigation, will do anything to find information about her missing father, including offering herself up as bait on a sting operation to capture the linchpin of a drug and human trafficking ring.

When the mission turns sour, Nailah finds herself captive on a ship bound for Earth, her only backup the one man who sets her heart on fire—her new partner, Agent Aragon Benoit.

Together they must trap the criminals before her undercover status is blown.

Lightning slashed through the dark clouds illuminating the lake, causing the water to look like a pool of swirling mercury. Another bolt split the darkness above and struck the surface, then spread into a big, round circle, its edges and center a spiraling mass of violet colors. Through the misty substance, a round metal ring became visible. It had glowing symbols on it. Steps appeared leading down to the beach.

It was as if a door had opened to another world, and the thought of it intrigued her. A form took shape in the center of the ring—a man. Mesmerized, Nailah couldn’t take her eyes off him as he made his way down the steps. Fuck if I didn’t enchant a version of my dream man to materialize. Really? Just because I wished upon a star? How many times throughout my life have I made a wish, and nothing ever happened…

He wore a Galactic Bureau of Investigations uniform, the black and blue bodysuit hugging his body like a second skin, showing off his well-defined abdomen and the bulging muscles of his arms and thighs. He had a handsome face with a strong chin and full lips. Her fingers itched to explore every single inch of that smooth ebony skin. She shook herself out of her stupor when she realized he carried a sword in his left hand. What the hell was a GBI agent doing here of all places? Or was he a criminal impersonating an agent?

Nailah heard his deep voice rumble. Her heart beat a tad faster. She didn’t scare easily, but this was freaky, and she wasn’t armed. Illusion or not, she wasn’t about to let him get the better of her. She stood and braced herself for an attack. “Who are you? Where did you come from? How did you—”

“You shouldn’t be able to see me.” He gave her a perplexed look.

Nailah brushed the hair out of her eyes. “See you? I’m not blind.”

“No one should be able to see or hear me. If you can, something is very wrong. My invisibility shield has failed.”

“Invisibility shield? Why? Who are you? Is that thing a portal?” She gestured to the swirling mass behind him but noticed it was beginning to fade. She lifted her arm and tapped her wrist, ready to call for backup.

The man stepped toward her and pointed his sword at her chest. “I wouldn’t do that if I were you.”

“And how will you stop me? Kill me?” She cocked her chin and raised a delicate brow.

“According to my paracorder, you’re not here. I can’t kill someone who doesn’t exist.”

The blade of his sword touched her chest, then tapped her on the shoulder. Her heart thundered in her chest. For an illusion, the weapon felt very real, and she was beginning to kick herself in the ass for leaving her phaser at home. I am such an idiot.

“Tell me who and what you are,” he ordered, the blade still hovering near her chest.

“My name is Nailah Guevera, and it is who I am that you should be worried about.”

“What are you doing here?”

The startled expression on his face at her name hadn’t escaped her. “I answered your question. Now you answer mine. Who are you?”

“I am Agent Aragon Benoit, space detective. My friends call me Ara.”

This was getting better all the time. Not only was he hotter than hell, but he had just introduced himself as the detective assigned to be her new partner.